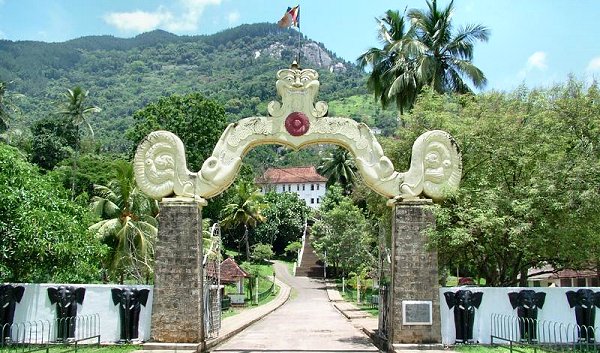 Aluvihāra; Luminous Cave Temple is synonymous with the teaching of the Buddha. Aluvihāra rightly assumes its significance in the annals of the history of world Buddhism. It is in this very location that the Tipiţaka was documented on palm-leaves. “Assembled the priests, who here compared their texts, which were then, or soon afterwards, committed to writing, and form the Banapota or Buddhist Bible. This took place about ninety-two years B.C.” “Therefore, to the enlightened Buddhist” says Major Forbes in his work Eleven years in Ceylon written in 1840 “This secluded and comparatively unpretending cavern must be of infinitely greater interest than the Temple of the Tooth or Thupārāma itself.” Aluvihāra also preserved with it a host of rich literature that had woven around the Tipiţaka including commentaries.

How Aluvihāra received its name

The name Aluvihāra has many meanings and legends associated with it. It was originally known as ‘Alu-Lena’ or ‘Āloka-Lena’ (Luminous Cave) based on a legend. During the reign of King Devānampiyatissa (250-210 BC) a monk was working on the commentaries (Aţţha Kathā). On seeing this, the King of Devās, Sakra illuminated the cave to facilitate his work.

The cave temple faced east and it received the morning rays of sunrise. This was the reason the cave was named Āloka-Lena since ancient times.

It cannot be disputed that the writing of the Tipiţaka brought doctrinal illumination to mankind. This brought illumination to the world from ignorance and suffering, thus Alu-Lena would suggest this event. In Pāli it is called Āloka-Vihāra which means Alu (Luminous) and Vihāra (Temple).